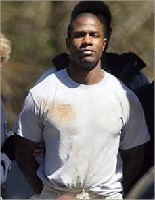 ithout parole, seven life sentences plus 485 years all running consecutive to one another.  Brian Nichols will never see the outside world again.  The Judge suggested that the Feds house him at the Federal Supermax prison in Colorado, although he has been convicted of State crimes.

I don’t know if this is the last of the courtroom days that we will see for Brian Nichols, the Feds may still prosecute him and try for the death penalty again.  Hopefully, we can all be glad that this nightmare of a case is over for now.  It has single handedly nearly bankrupted the public defender system.  I should note that this is not the only cause of that problem, the legislature is mostly to blame for failing to appropriate all of the money collected from the public defender surcharge on criminal cases, but that is a topic for another day.

Today, I am worried about what will happen in the legislature next year.  Bad cases usually make bad law.  It will take some serious restraint for the legislature to not have a knee-jerk reaction to this case.  I would bet my house and my kids college fund that one of the first bills introduced next session is a non-unanimous death penalty bill.  A similar bill was defeated two sessions ago.  It is appropriate that a death verdict must be unanimous.

I also worry about the backlash that he three hold-out jurors will face. They will face public scorn, ridicule and possibly threats of violence like they have never known their whole lives.

In the end, it was a huge waste of millions and millions of taxpayer dollars to try to kill Brian Nichols.  This case could have been resolved with a guilty plea and this sentence years ago.  I do also understand the prosecutor’s argument that if they don’t seek the death penalty on Brian Nichols, then how would they ever justify it on anyone else.

Maybe Judge Bodiford was right when he talked about how some people feel at sentencing.  “If only Agent Wilhelm would have gotten the draw on Mr. Nichols.”