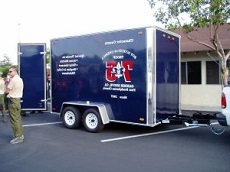 The losers who stole their utility trailer full of camping gear are NOT.

The crime happened this past memorial weekend in Maury County.

Boy Scout Troop 154 out of Columbia conducts meetings at the Zion Christian Academy, and that is where the troop stored its utility trailer full of tents and Coleman stoves and camping gear that boys purchased themselves through a myriad of fund raisers.Scout Masters tell Messed Up the highly identifiable trailer is worth about $2,000. The tents and equipment inside are worth an estimated $5,000.

Scouting officials say the troop does not have insurance. So scout organizers are working with the school where the trailer was stolen and the church that sponsors them to see if those policies might cover them.
In the meantime the boys are without their equipment.Eli Anderson is an Eagle Scout who has this to say:“I was shocked. I remember when I first started, we didn’t have that trailer. I remember all the fund raiser to pay for it. For someone to take it away that is not right man. It’s not right.”

Eagle Scout Wes Hutton takes pride in the fact the boys bought the equipment through their own hard earned efforts.

“We are a family. That trailer was everything we earned. We worked for the money we earned.”The 17 year old says all the boys look forward to the camping get-a-ways. 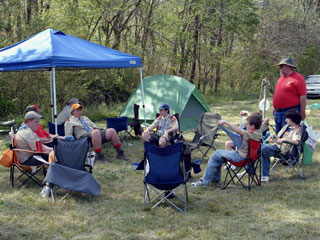 Dr. Jamie Hutton is troop 154 assistant scout master.
“The principal at the school saw the trailer on Friday. By Monday morning,  Columbia Power and Water found our stuff at the Hampshire water pumping  station. We picked it up. They (thieves) threw out troop flags and an American  flag and food stuff. The rest they kept.”

Hutton says there were 16 eureka green tents. Six smaller back pack tents. And  one master tent that the Eagle Scouts and senior patrol scouts used. Dr. Hutton  says the thieves got Coleman stoves and lanterns and water jugs and pots and pans.”
“It’s priceless in terms of the memories and camp outs. The trailer is valued at $2,000 everything all together is $8,000 to $10,000, of money spent.”

Maury County Sheriff Deputies are working the theft. An investigator tells me,
since the first of the year, the county has seen about 30 stolen trailers like the one belonging to the Boy Scouts.

Larry Cleghorn is the Scout Master. He writes: 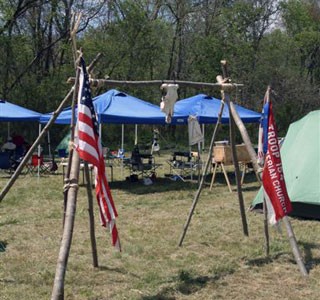 “The trailer had been parked at Zion Presbyterian church property, which is their sponsoring organization. The trailer was locked up both in the back and with a lock on the trailer hitch. The trailer tongue lock was found hammered off in Zion’s parking lot. The troop would appreciate any help finding their gear and their trailer.”

If you have any information contact the Maury County sheriff’s Department.