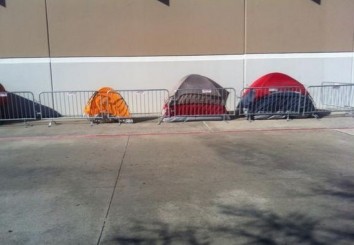 The dash for deals is starting early this year, but some who set up tents to camp-out in the name of a good bargain have been forced to leave.
Monday morning, at a Best Buy In Pembroke Pines, police forced several men who had pitched tents on Saturday to pack up. They told them the earliest they could return would be Wednesday.
Daniel Toro was among those in the group who had hoped to snag some savings by teaming up with friends to claim the front of the line at the Best Buy. “The stores always open for the first five or 10 people,” said Toro. “You might have the whole store for yourself. You can pick anything you want without a bunch of other people.”

Best Buy, which has plans to open at midnight, on Thanksgiving, is still offering deals ahead of Black Friday, and some are already shopping early to skip the crowds. Thomas Khal went shopping on Monday and had noticed the campers. “I saw it,” he said. “I was here Saturday, and I was amazed. Two tents. I couldn’t believe what I was seeing. It’s crazy.”

The Pembroke Pines Best Buy was not the only Best Buy with eager Black Friday shoppers. Over the weekend, would-be shoppers at a Best Buy in Fort Myers set themselves up with televisions and even dinner tables. “We’ve pretty much gone from not sleeping in a tent to a tent and slowly progressed to where we’ve got everything that we remember we need,” said Sean Kelley, who is ready to have his Thanksgiving feast in line. “On Thanksgiving, mom comes out with the china and the plates, and we’ve got everything you have on a normal Thanksgiving table.”

Large amounts of shoppers are expected to be in full force at many other stores, some opening as early as 8 p.m. on Thanksgiving. Steve Stansell said these early shopping times detract from what Thanksgiving is really about. “I think people have lost the meaning of the season,” he said. “It’s all about accumulating material things. I think you’re missing the tradition of the holiday.”

Some employees at Walmart plan to walk out if they are forced to work on Thanksgiving, left to miss out on their own family traditions due to these work hours creeping closer to dinner time over the past few years.