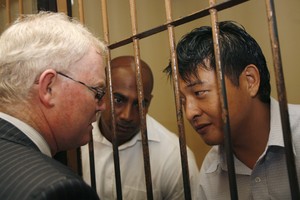 The two masterminds of the Bali nine heroin smuggling operation, Andrew Chan and Myuran Sukumaran, have been found guilty in an Indonesian court, and sentenced to death by firing squad. Two couriers, Michael Czugaj and Martin Stephens, have today been sentenced to life imprisonment, joining fellow couriers Renae Lawrence and Scott Rush, who were sentenced yesterday. Chan, 22, and Sukumaran, 24, were found guilty of having provided the money, the airline tickets and the hotels to the drug mules.

It is the first time the Denpasar District Court has handed down death sentences for drug trafficking.

The sentences were in line with prosecutors’ recommendations.

Judge Arief Supratman, reading out Chan’s verdict, said he was “guilty of illegally exporting first-class narcotics in an organised way”.

The defendant, he added, was also “the person who made the travel arrangements for several people from and to Australia”.

“According to the teachings of various religions, the death penalty can be justified,” Mr Supratman said.

Activists from an Indonesian anti-narcotics group inside the courtroom shouted “Hooray! Long live the judges!” when Chan’s verdict was read.

Dressed in a white shirt and dark pants, Chan accepted the sentence quietly and shared a brief exchange with his lawyer before being led away.

The head judge said Chan’s refusal to cooperate throughout the investigation was taken into account.

“There are no mitigating factors. His statements throughout the trial were convoluted and he did not own up to his actions,” Mr Supratman told the court.

His lawyer, Mohammad Rifan, said he was shocked at the decision and is yet to discuss the option of an appeal with Chan.

“The defendant also funded and arranged the transport and accommodation for his friends,” they said.

In a separate judgements, Czugaj from Brisbane and Stephens from Wollongong, were found guilty of attempting to smuggle heroin from Bali to Australia and sentenced to life imprisonment.

The sentences were recommended by the prosecutors.

“I’ve just heard about Michael’s sentence and again I’m sorry that it’s so severe,” he said.

“When I heard Scott Rush’s sentence yesterday, I thought that perhaps this would be the same for Michael today.”

Michelle Stephens, mother of Martin, says her son’s case is not over yet.

“We’re not surprised the way the prosecution went, but we’re not downhearted either,” she said.

“It’s not over. There’s appeals, there’s everything else, so we’ll just take it as it goes.

“I’ll speak with the lawyers, we’ll work out what we’re doing and it’s still in the hands of God.

“Just because he didn’t give us the decision I want today, it doesn’t mean to say it’s not going come eventually.”

Around 20 foreigners, most of them Africans, are on death row in Indonesia for drug offences. The latest foreigners shot by firing squad for drug offences were two Thais in October 2004. They had sat on death row for eight years. The final stage of an appeal allows inmates on death row to seek clemency from the president. Foreign Affairs Minister Alexander Downer has told Parliament he has written to the Indonesian Government asking that the death sentence not be imposed on the Bali nine.

Mr Downer has told Parliament those sentenced have the right to appeal and that life sentences can be reduced for good behaviour. He says he hopes Australia can reach a satisfactory agreement with Indonesia over the interchange of prisoners.

“We have been discussing with the Indonesian authorities a prisoner exchange agreement, and these discussions are in an early stage,” he said.

Mr Downer says Australia has a long-standing policy of opposing the death penalty.

“On the 18th of December last year, I wrote to the Indonesian Attorney-General reminding him that the Australian Government was opposed to the death sentence and we didn’t want to see, in the context of the Bali nine, any of the Australians sentenced to death,” he said.

Prime Minister John Howard has pleaded for Australians to learn from the sentences.

“Can I just say to every young Australian, please take notice of this,” he said.

“I even beg them not to take the terrible risk that these young people have done, their lives destroyed.

“In the case of two people, their lives could well be taken. You can’t expect governments in other countries to take a soft view of drugs.”

Lawyers for two other Australians given life imprisonment sentences yesterday for heroin trafficking have indicated they will appeal. Lawrence’s sentence was a surprise move, as the prosecutors had asked for leniency and 20 years in jail for the 28-year-old woman from Newcastle.

Rush, from Brisbane, received the life sentence prosecutors had asked for.

In both cases, the judge in Denpasar District Court said there was no evidence that 20-year-old Rush and Lawrence were forced to carry the drugs because of threats made to their families’ lives.

The remaining three members of the Bali nine will have their verdicts handed down on Wednesday.

Sydneysiders Matthew Norman and Si Yi Chen, and Tan Van Nguyen from Brisbane, are all under the age of 24 and face the prospect of spending the rest of their lives in an Indonesian prison.