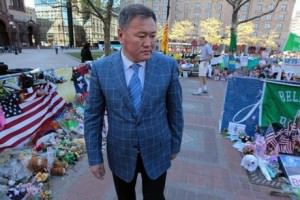 Azamat Tazhayakov, friend of Boston Marathon bombing suspect, Dzhokhar Tsarnaev, pled not guilty to charges of conspiracy to obstruct justice and obstructing justice and engaged the help of a criminal defense attorney. Tazhayakov, along with friend, Dias Kadyrbayev, attended college with alleged bomber, Dzhokhar Tsarnaev, at UMass Dartmouth, during the time of the bombing. They allegedly tried to hinder the investigation into the bombing by throwing away evidence that they found in Tsarnaev’s room before his capture and arrest.

Tazhayakov’s father, Amir Ismagulov, believes that his son has been unfairly targeted in the investigation because he is a foreign-born Muslim. He asserts, along with his son’s attorney, Arkady Bukh, that his son is not a terrorist and that he loves the United States.

Investigators believe, however, that he went into Dzhokhar’s college room and removed important pieces of evidence. They state that he and a friend admitted that they went into the alleged bomber’s room and agreed to remove fireworks, Vaseline, and Tsarnaev’s laptop, after they saw news reports identifying him as one of the bombing suspects.

The fireworks evidence was later found in a New Bedford landfill, after the suspects threw the backpack with them included away. Although it is not clear when the two college students told the investigators about their part in removing evidence, it is clear that they owned up to their part of it and were open with the agents in when and where they threw the backpack away.

Tazhayakov ‘s parents and sister traveled from Kazakhstan to support their son and plan to stay until the case is resolved against him. Arkady Bukh, of Bukh & Associates, PLLC, an international law firm, claims that the government has very thin evidence against his client and “rushed into things” when they charged him.

If Tazhayakov is convicted of all of the charges levied against him, he could face up to 25 years in prison.