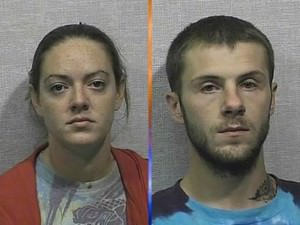 Seymour Police officers arrested two people late Monday afternoon who are accused of being involved in a wedding day theft that made national headlines.

Casey D. Cockerham, 27, and his girlfriend, Michelle Nichalson, 24, both of Brownstown, were booked into the Jackson County Jail around 6:30 p.m. Monday on D felony charges of theft. Each was being held on $1,005 bond.

The theft took place Sept. 19 at the American Legion in Seymour, where the couple’s wedding reception was being held.

“To our knowledge, the suspects did not know the bride or groom,” Abbott said. “They were driving by and saw the reception going on and decided to take advantage of the situation.”

Abbott said none of the money has been recovered.

“Most of the gift cards had been canceled already and no one has tried to cash any checks,” he said.

The bird cage was found and turned in to police by a local resident who had read about the theft in the newspaper.

“A person picked it up off South Walnut Street and called us,” Abbott said.

The suspects were not charged with robbery, Abbott said, because they did not use force during the incident.

The original of this story appeared on Tribtown on September 29, 2009. Reprinted with full permission.