A non-drug law case with important implications for Fourth Amendment restraints on drug law policing, Arizona v. Johnson, is being heard in the United States Supreme Court today. The case is about whether police may “pat frisk” people for weapons in the context of a traffic stop when they think they might be gang members with criminal records — and therefore potentially “armed and dangerous” — even if they don’t have reason to think the people are committing any specific crime. 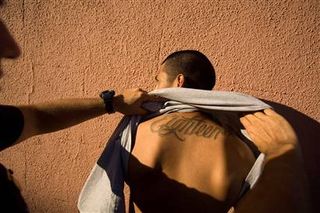 (Above: What’s going on here? Oh yes, this must be a “protective pat frisk” performed for “officer safety” because this man might have had an Uzi hidden between his shoulder blades. The Supreme Court could give a green light to this kind of behavior, even when there is no suspicion of any particular crime, in Arizona v. Johnson. Photo by Robert Nickelsberg, Getty Images, from the website of MSNBC.)

The officer in this case stopped a vehicle for having suspended insurance. An individual in the car, Johnson, was dressed in blue, with a blue bandana, and had a police scanner. Johnson was cooperative with the police, admitted that he had previously done time for burglary, and stated that he came from a town that had a Crip gang. At that point, the officer asked Johnson to step out of the car and conducted a pat-frisk, finding a gun. The officer, however, had no indication that Johnson was committing any crime.

As a practical matter, we all know, police do this all the time, every single day. Watch police interact with young people of color and you will, I guarantee, see police grabbing people’s pockets, patting down pants, lifting up baggy shirts, and so forth. Wear red shoelaces on 24th street in my neighborhood of San Francisco and you could be subject to the same thing — but only if you’re a young Latino kid. Given the conservative composition of the current Supreme Court, I fear that Arizona v. Johnson will be the opportunity for the Supremes to say that this invasion of privacy, too, is entirely “reasonable” and therefore does not violate the Fourth Amendment. Most middle class people, of course, would feel outraged if police just walked up to them and started frisking them just because the cops don’t like the way they look. Of course, most middle class people don’t have felony convictions on their record either. But this is one more area where, by virtue of the drug war and the gang politics it has produced, policing practices look completely different for some groups of people than they do for others.

SCOTUSblog now has the transcript here.  One frustration with the oral argument is that it mostly assumed that the facts supported a belief that Johnson was “armed and dangerous.” There were a few substantive questions on this point, however, as follows:

JUSTICE KENNEDY: You — you don’t concede in this case, or do you, that Trevizo had a reasonable suspicion that Johnson was armed and dangerous? That has not been found for purposes of —

MR. PINCUS: Absolutely not. The lower court assumed it for the purposes of decision —

JUSTICE KENNEDY: So even if you did not prevail, we would have to remand on that point?

MR. PINCUS: Yes, that point would have to be remanded so that the court below could address it.

JUSTICE GINSBURG: How could he not be dangerous? First, [the arresting officer] said: I suspected him because he was looking behind, but — and then she said he was wearing the clothes of a gang, and then he admits to having been convicted of a burglary. Why isn’t it very normal for a person to be apprehensive?

MR. PINCUS: All right. Let me give three quick answers to those. First of all, he looked — this was an unmarked car, Your Honor. I — I think a — a very reasonable inference is he looked behind because he was surprised that there were, all of a sudden, flashing lights and a siren on a car.

The gang colors, as the lower court — the Court of Appeals here noted, although Mr. Johnson was wearing blue, the driver was wearing red. If these were really gang colors, it — it — it is not consistent with the conclusion that they were gang colors to have people of different colors who were rival gangs in the same car.

And the third thing is, as lower courts have found, acknowledging prior criminal convictions is a basis for concluding that someone is not dangerous because they were forthcoming.

MR. PINCUS: I don’t think this Court has come down one way or — or the other, Your Honor. I —

JUSTICE SCALIA: What do you think?

MR. PINCUS: It seems to me there — there is a requirement of immediate danger.

MR. PINCUS: I don’t think if he’s just a fishy character, it’s enough. I think the reason is immediate threat to society.