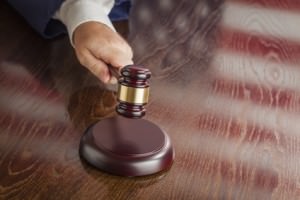 In the People v. Collier case, on February 8, 2005, the defendant was found guilty of five counts of armed robbery (Penal Law § 160.15 [3]) for holdups at five different Albany, New York area stores during a two month period in the fall of 2004. The defendant was accused of displaying and threatening the use of a knife in order to force store employees to give him money out of the cash registers. On April 22, 2005, the defendant was offered a plea agreement to plead guilty to two counts of robbery in the first degree (the first and fifth counts) in satisfaction of a full indictment including unindicted robbery charges. Under the plea agreement which the defendant agreed to, the defendant was to be sentenced to a term of 25 years on the first count, and five years on the fifth count, followed by five years of supervised post-release. The judge in the case had the discretion to either direct these sentences to run concurrently or consecutively and chose that the fifth count run consecutively.

The County Court judge resentenced the defendant to concurrent prison terms of 25 on the first count and 10 years on the fifth count with five years of post-release supervision. The defendant appealed again on the grounds that the 10 year sentence was illegal because he originally pleaded guilty in exchange for a five year sentence on the fifth count. The Appellate Division disagreed, arguing that the defendant received a lesser sentence under the resentencing than the one he originally agreed to under the plea agreement because the County Court directed the sentences run concurrently instead of consecutively, which reduced his aggregate prison term from 30 to 25 years. Therefore the Appellate Court further argued that the defendant had received the benefit of his plea bargain, and that the Court was not required to allow the defendant to withdraw his plea.

Chief Justice Lippman raises valid concerns about whether the defendant’s due process rights were violated in this case and whether his plea should be vacated. A good New York criminal defense lawyer at the trial level and appeals level is necessary to represent the defendant in criminal cases involving such complex issues in order to protect the defendant’s constitutional rights.