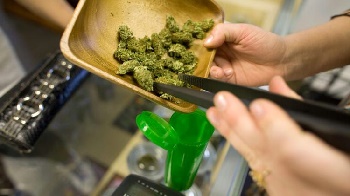 June 6, 2006 will mark the one year anniversary of Gonzales v. Raich, the Supreme Court’s decision upholding the federal government’s ability to regulate medical marijuana under the Commerce Clause. To take stock of the impact of the decision, I’m going to have a couple posts that look at different a year after Raich.

For starters, the most remarkable thing about the impact of the decision is what hasn’t happened. Post-Raich, there has been a crackdown on some medical marijuana operations at the state level, but many others have been allowed to continue operating. Immediately after Raich, there were a couple quick crackdowns on medical marijuana dispensaries. In San Francisco, for example, three clubs were raided and 13 people arrested on June 13, allegedly for involvement in money laundering, and the fast pace of those raids seemed to suggest that a total shutdown of pot clubs was in the works. Instead, we have seen only sporadic enforcement.

And there were probably some other raids that don’t show up on Lexis or on the Web. But the more interesting thing is that many other clubs have been allowed to continue operating, seemingly without much federal intervention. And this in spite of the fact that the Office of National Drug Control to regard marijuana as a serious problem and the FDA, controversially, has denied that marijuana has medicinal value.

Eleven states have now legalized the use of medical marijuana and more than half of state have what the drug-information website Erowid characterizes as “effective protection” for medical users. There are also moves afoot to legalize medical marijuana in New Jersey and to legalize marijuana altogether in Nevada. A proposed medical marijuana law in Massachusetts was sent to committee to die in March, with   Raich as the reason the measure was abandoned.

But did Raich end the viability of medical marijuana? Almost a year later, the answer is no. Growers continue to be harassed and jailed, and running a co-op is hardly hassle free, but the medical marijuana movement is very much alive.