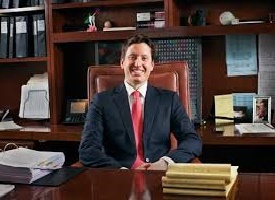 It’s too bad we already picked a Lawsuit of the Day. This latest litigation — brought by James Colliton, the ex-Cravath tax lawyer who, in the words of , “paid a woman so he could have sex with her two underage daughters” — is pretty rich.

Once again from the AP:

A disbarred Manhattan lawyer who pleaded guilty to statutory rape has sued the American Express Co. giving police credit card information he says led to his capture.James Colliton was arrested in February 2006 near Toronto, where prosecutors say he fled after being indicted on charges of having sex with underage girls.

The 44-year-old said Monday that American Express violated its agreement to withhold customer information from third parties. The lawsuit seeks an unspecified sum.

This lawsuit will probably be as successful as Colliton’s litigation against Cravath, initiated by a handwritten complaint on notebook paper, claiming that the firm screwed him on his bonus (after they fired him for his criminal conduct).