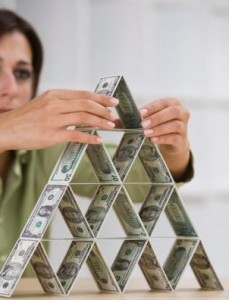 Ponzi scheme is a scheme in which unrealistically high rates of return are promised to investors. When new investors are lured by these promises and provide their funds to a money manager or financial advisor, money that the new investors pay in is used to enrich the person orchestrating the fraud scheme as well as to pay the existing investors. The scheme can continue until no new investors can be found and the money runs out.
Ponzi schemes are illegal and can result in federal securities fraud charges. Just recently, the Washington Post reported on a former worker from Fannie Mae who was sentenced to 13-years imprisonment for allegedly running a Ponzi scheme. The defendant will also be forced to repay $28.6 million to more than 170 different investors.

According to the Washington Post, the defendant who used to work for Fannie Mae operated an investment fund from 2006 through 2010.  He marketed his investments by claiming that he was using a “sophisticated trading strategy that protected against loss.”  He promised high rates of returns but allegedly made high risk trades that led to a string of losses. He was also accused of withdrawing as much as $2.5 million of investor funds for his own personal use.

The defendant claimed that he was innocent of the charges and that the investments he made for clients suffered losses as a result of the financial crisis.  The Securities and Exchange Commission and federal prosecutors did not believe the defendant’s claims and pursued both a criminal and a civil action.  The SEC obtained a civil judgment against the defendant.

When the defendant was represented by a public defender service, he entered a guilty plea in March of 2014.  A U.S. District Judge sentenced him to 13-years of prison in May of this year. The defendant has since filed a motion to withdraw the guilty plea.  The defendant is now claiming that it was market forces and not fraud that resulted in the string of losses.

The case is a clear illustration of the significant penalties that could follow investment fraud charges. The SEC and federal regulators have become aggressive in pursuing legal action against people who are believed to have violated securities laws.

The push towards aggressive prosecution and harsh sentences follow high-profile investment fraud cases like Bernie Madoff. These are cases in which investors lost significant sums of money. The stories about these alleged instances of fraud always feature sympathetic victims, like a children’s charity that invested with the defendant in this most recent case.  What the stories often ignore, however, is the complexity of investment markets and financial transactions that occur within those markets.

Defendants could be accused of participation in a Ponzi scheme if authorities believe that their intentions were to mislead investors, but there may be a fine line between a legitimate investment fund that suffers losses and a scam that is in violation of the law.

Those who are accused of any type of investment fraud offense need to ensure they are represented by a legal professional who understands the complexities of the securities and commodities markets and who is prepared to help make the best possible arguments to try to avoid conviction.

An attorney with experience in investment fraud should also be consulted for assistance before a plea deal is negotiated or before a defendant in a securities fraud case decides how to plead. With the potential for decades of imprisonment and the push for tough prosecution of financial crimes, the stakes are too high not to have a good lawyer.