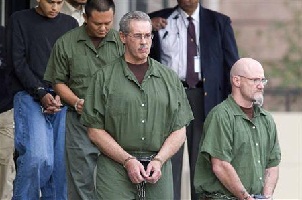 The verdict followed a 6 week trial in U.S. District Court before Judge Hittner. Stanford did not testify at trial. On Monday the jury had informed the judge they were having trouble reaching a verdict.

The government accused Stanford of running a Ponzi scheme defrauding investors of more than $7 billion in fraudulent certificates of deposit at the Stanford International Bank in Antigua. As detailed inthis article in the New York Times, it took three years to get the case before a jury because Stanford was severely beaten by another inmate while awaiting trial in 2010. He then became addicted to prescription drugs and underwent almost a year of therapy before finally being declared fit to stand trial.

Stanford will in all likelihood face a sentence of life in prison.