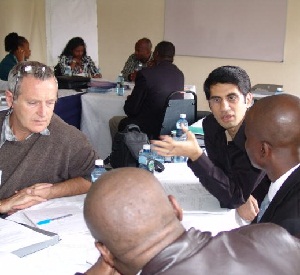 Are autonomous feminist movements more important for tackling violence against women than the wealth of a country and the levels of female representation in government? Nell Osborne examines the transformative power of women’s movements.

Gender based violence has been called the most pervasive and shameful of all human rights violations. And yet, it still remains largely unseen. There is a strange disjuncture between the prevalence and response. A recent study finds that 45% of European women have experienced some form of physical or sexual violence – making it statistically more prevalent than cancer.

In David Foster Wallace’s essay This is Water, he tells us a story, in which two young fish swim along in the sea. An older fish swims past, how’s the water?he asks.  The younger fish are baffled, they swim on in silence until one of them finally turns to the other: what the hell is water? Sometimes the most ubiquitous realities are also those hardest to see and to talk about. In the same way, violence against women and the massive human, economic and social costs it entails, are often ignored. Nowhere is this more obvious than on the political agenda.

Whilst some governments actively perpetrate or sanction violence against women, there are others that merely close their eyes and ears to it, with an ignorance bordering complicity. Globally, governments continue to fail women by refusing to contextualise gender inequality and associated forms of violence within a broader, politicised context. Research has shown that violence against women is rarely raised as a governmental concern, much less as a priority.

Under what circumstances does gender based violence gain visibility?

This past July saw a historic decision by the High Court in Namibia when it ruled in favour of three women living with HIV who had been forcefully sterilised by the government. Considering the length and difficulty of this case (it was the first of its kind in Southern Africa: proceedings began in 2009) this is a victory indeed. The campaign was spearheaded by The Namibia Women’s Health Network (NWHN), formed and led by women living with HIV. It is one of the resounding success stories of 2012.

There remains a problem with the court failure to recognize any causal link between the procedures and patients’ HIV status. The refusal to join up obvious dots and expose a wider discriminatory agenda against women with HIV was a neglected opportunity. The court claimed “there is no credible and convincing evidence that the sterilization procedures had been performed…due to the fact that they are HIV positive” despite two of the three women having given testimonies to that effect. The narrative of a woman living with HIV may not be considered “credible evidence” but with the involvement of thousands of women living with HIV, from all of the 13 regions of Namibia, the network has radically transformed the public understanding of coerced sterilisation as a human rights abuse.

In spite of the Namibian government, the momentum first accumulated by the women’s network continues to accelerate. Nicole Fritz from the Southern Africa Litigation Center says that these cases represent, “only the tip of the iceberg.” The win has prompted other women to mobilize around the issue of coerced sterilization; over 40 women with HIV in Kenya and 22 women in South Africahave come together to seek their own judicial justice.

The Coalition of Women Living with HIV and AIDS (COLWHA) in Malawi, made up of 50,000 registered members, further illustrates the global success of women’s networks. Members actively address violence against women in communities by educating community members and traditional leaders on the rights of women in an attempt to end discrimination and inter-personal violence. Recently, COWLHA provided 51 women, who have themselves experienced violence, with paralegal training to create enabling environments for the promotion of women’s rights in communities. As a result of their success, COWLHA has been made a strategic partner of the Ministry of Women and the Office of the President.

Moving forward with the voices of women

Recent research on how best to tackle violence against women affirms the need for women’s networks. Conducted over four decades, in 70 countries, it concludes that the existence of “feminist movements that were autonomous from political parties and the state” were the most important factor in urging regional and national level commitment to tackling gender based violence. Feminist movements enable women to “articulate and organize around their top priorities as women, without having to answer to broader organizational concerns or men’s needs.” This study strikes a positive note: highlighting the agency and transformative power of women’s movements. Most interestingly, they are more important for tackling violence against women than both the wealth of a country and the levels of female representation in government. The global scope of the research offers an insight into the failings of many governments of ‘developed’ countries at tackling gender-based violence among the populations they represent.

Institutionalising women’s rights can, paradoxically, impede them; making them vulnerable to other more ‘political’ or ‘pressing’ issues. This is clear if we look at the current regressive behaviour of the UK government. Services that promote women’s sexual and reproductive rights, in particular, seem to have been ring-fenced as an easy target for funding cuts. The Independent Advisory Groups on Sexual Health and Teen Pregnancy have both been axed and key service providers such as Brook are, for the first time in recent history, receiving no core funding from the Department of Health.

Whilst women’s hard won rights suffer from economic cutbacks, incidents ofdomestic violence have increased under the recession. The need to address this impact is something that Baroness Scotland articulated as far back as 2008, and yet it seems that the opposite has happened. Due to yet more funding cuts, women’s refuges are closing all over the country with a 31% drop in funding from local authorities. Far from showing a commitment to tackling inequality as the root cause of gendered violence, the government is failing to protect even the women who are left vulnerable as a result. It raises the question, who is holding the government to account?

Yes Gender Based Violence remains much more prevalent in less economically developed countries and perhaps this has led many in the UK to a false sense of security. A recent poll in the UK, showed that only 14% of women identify as feminists, whilst 1 in 5 claimed feminism is ‘not relevant’ to their generation. Without the presence of strong, autonomous feminist movements to keep gender on the agenda, women’s rights in the UK are quietly being forfeited.

The 16 days of activism against gender violence gives us a chance to re-evaluate the importance of social activism in tackling violence and inequality. Feminist social movements continue to provide women with a much-needed platform from which to make demands. Women’s voices being heard will ensure that violence against women, of any kind, is no longer invisible or ignored, in any country.