The shot could not be duplicated even by the best marksman in the state. 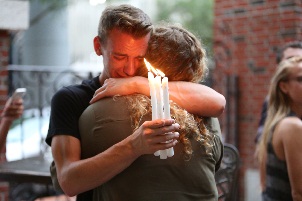 Fired from the parking lot of a small, cramped neighborhood grocery, the bullet traveled over 300 feet — longer than a football field, split a narrow gap between two apartment buildings and ricocheted off a metal door frame before striking a young mother in the chest as she held her 10-day old baby.

When everything quieted down, two families were wrenched apart. A woman dead, and a man on the run.

Sherrie Williams, 24, enjoying the late summer evening stood in her doorway holding her baby. Birmingham Police Sgt. Johnny Williams said two men got into a fight. Torrey Williams, the victim’s brother, had finished picking up a few things for dinner when the fight started, and he watched. A man, Mr. Williams didn’t recognize, began to walk towards him and appeared to be trying to pick a fight, Williams told police.

Torrey Williams said he walked away from the confrontation, and as he did, the man pulled a gun and started shooting.

Sherrie, hit in the chest by a stray bullet, fell backward. She landed on a sofa by the front door, still clutching her child.

After an onvernight search, McLellan turned himself in. Birmingham Police arrested McLellan, 20, and charged him with capital murder according to Jefferson County District Attorney Brandon Falls. McLellan was held without bond.

Besides capital murder charges, McLellan found himself indicted on charges including possession of a controlled substance and receiving stolen property — which included four guns.

Jury selection began on a hot, humid morning. By 5 o’clock that evening, attorneys were still trying to narrow down a pool of 48 potential jurors. It was an emotional day, and numerous arguments between Williams’ family and McLellan’s family erupted in the hallway. Judge Stephen Wallace suggested everyone stay calm and advised them: “poor behavior” would not be acceptable.

“He shouldn’t have been shooting,” McLellan’s lawyer Erskine Mathis told the jurors when the trial started. “This was an accident. He didn’t even know the girl was there.”

The jury didn’t agree with Mathis.

McLellan was sentenced to life in prison — without the possibility of parole.